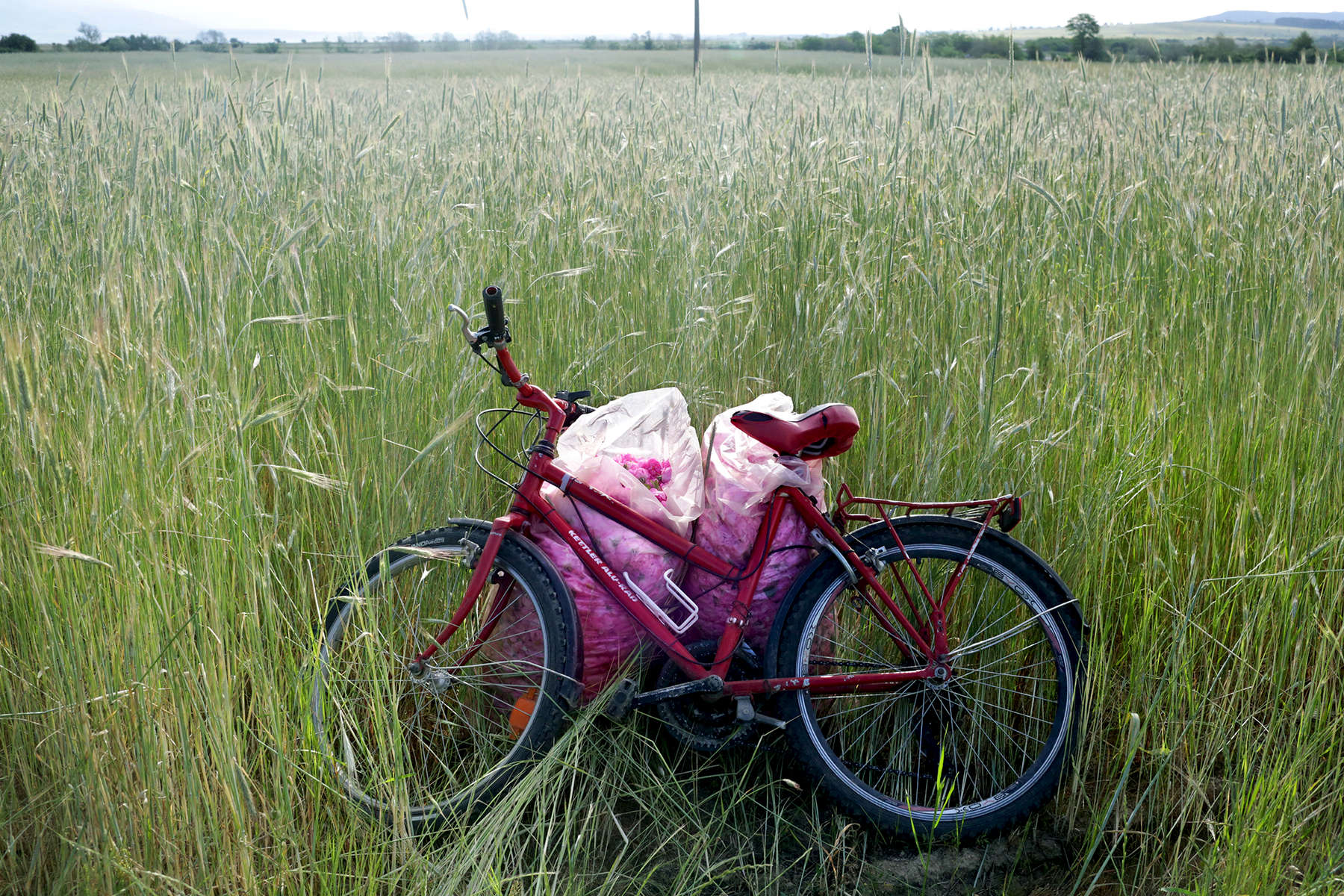 A bike and a bag of roses, in a field of wheat across from rose gardens in Osetenovo, Bulgaria on May 29, 2018.

The most common oil-bearing rose of Bulgaria's Rose Valley is the pink-petaled Rosa Damascena Mill. Scientists unofficially call its local population Rosa Kazanlika, in honor of its breeding ground, Kazanlak - a town regarded as the heart of the valley. Kazanlak boasts a Rose Festival with traditional rose-picking and distillation in the mountains, folk dances, roses ensconced in cakes, soaps, jewelry, wine and rakia (a regional 80-90 proof fruit brandy,) and even a parade in honor of its very own Rose Queen, picked from a pool of high school graduates. The birth place of Rosa Damascena is unclear, but many accounts trace it to Damascus, Syria’s capital (hence, some say, the name,) yet others to Ancient Persia in Iran - and Bulgaria’s local rose population, to a Turkish merchant in the 17th century.

Since Rosa Damascena no longer grows in the wild on its own, it must be cultivated. The sloping valley stretches for about 140 kilometers across a narrow interval between the Balkan mountain range (otherwise named Stara Planina, or Old Mountain in Bulgarian,) and Sredna Gora (Midland Forest) mountain. Once also known for making pistols, ammunition and automatic weapons under Communism, it is now simply famous as the source of an oil likened to “liquid gold.” Rose oil is thus nicknamed for a reason - it takes an average of 3.5 tons of roses to produce just one kilogram of rose oil, with that kilogram valued between 6,000 and 12,000 euros.

Roses like sandy, permeable, clay-free soil, and a clear, sunny climate with mild winters and enough atmospheric humidity during the spring and their summertime flowering period. These are just the conditions found in The Rose Valley - the mountain ranges and two rivers, its shield against atmospheric volatility. In the Valley, it is usually sunny but cool before noon, with hotter, sometimes rainy afternoons. These temperature amplitudes during the flowering period provoke the production of rose oil, which is formed as a defense reaction of the plant.

The rose flower is very sensitive, and its oil resides in the top layers of the flower, so it evaporates easily with rising temperatures. Cold dew drops in the morning hinder the evaporation of oil, and the moist air preserves the plant’s moisture, turgor and oil content, which is why farmers usually pick the flowers between sunrise and 11:00 a.m.